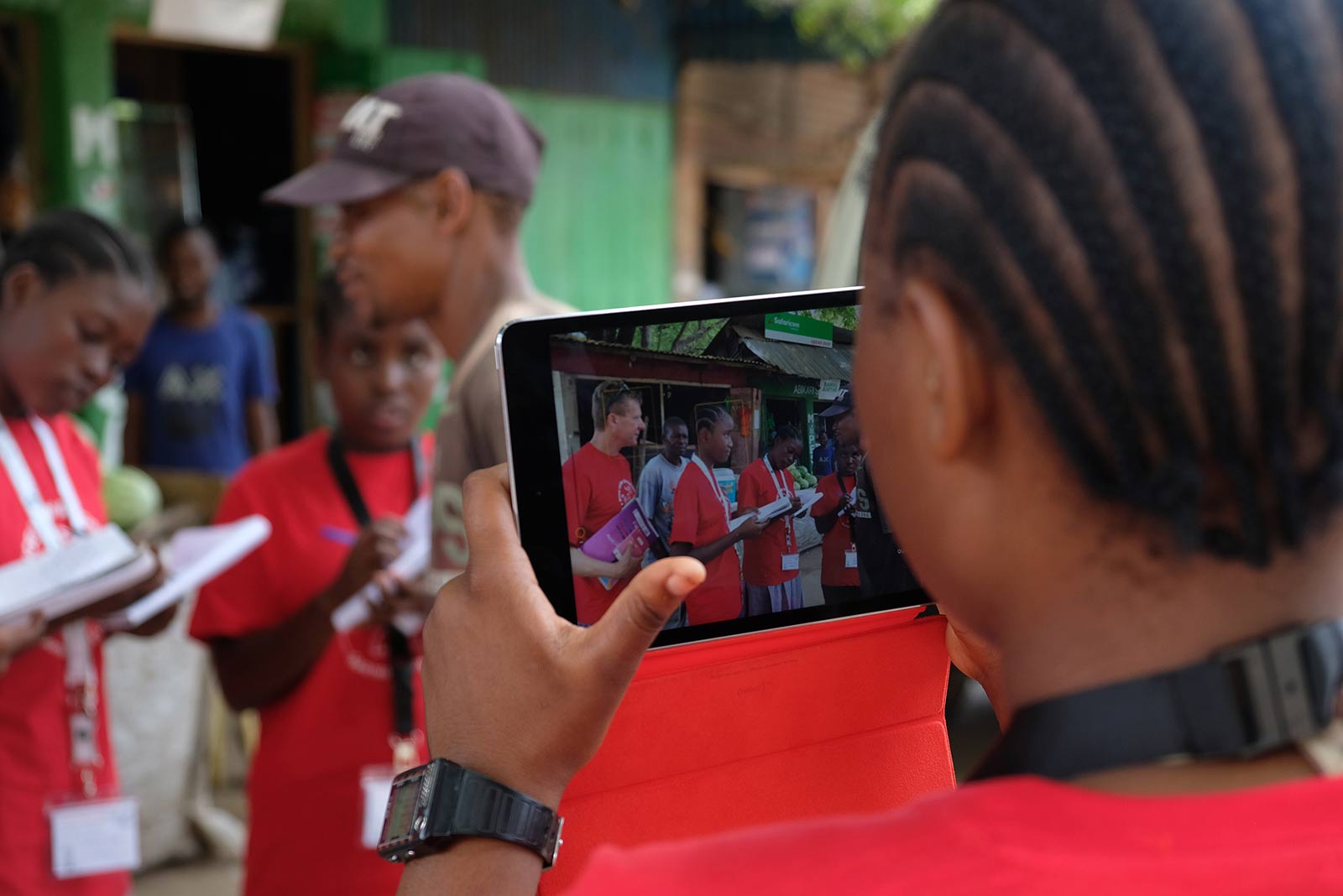 The second day is off to a good start. As announced by team leaders Maria and Melanie yesterday, Team Abdalla will work in the class room today – to edit and upload the portraits the students have taken of each other. “We are first to work on the real website?” the students ask – and when told, “yes, you are”, their faces light up. 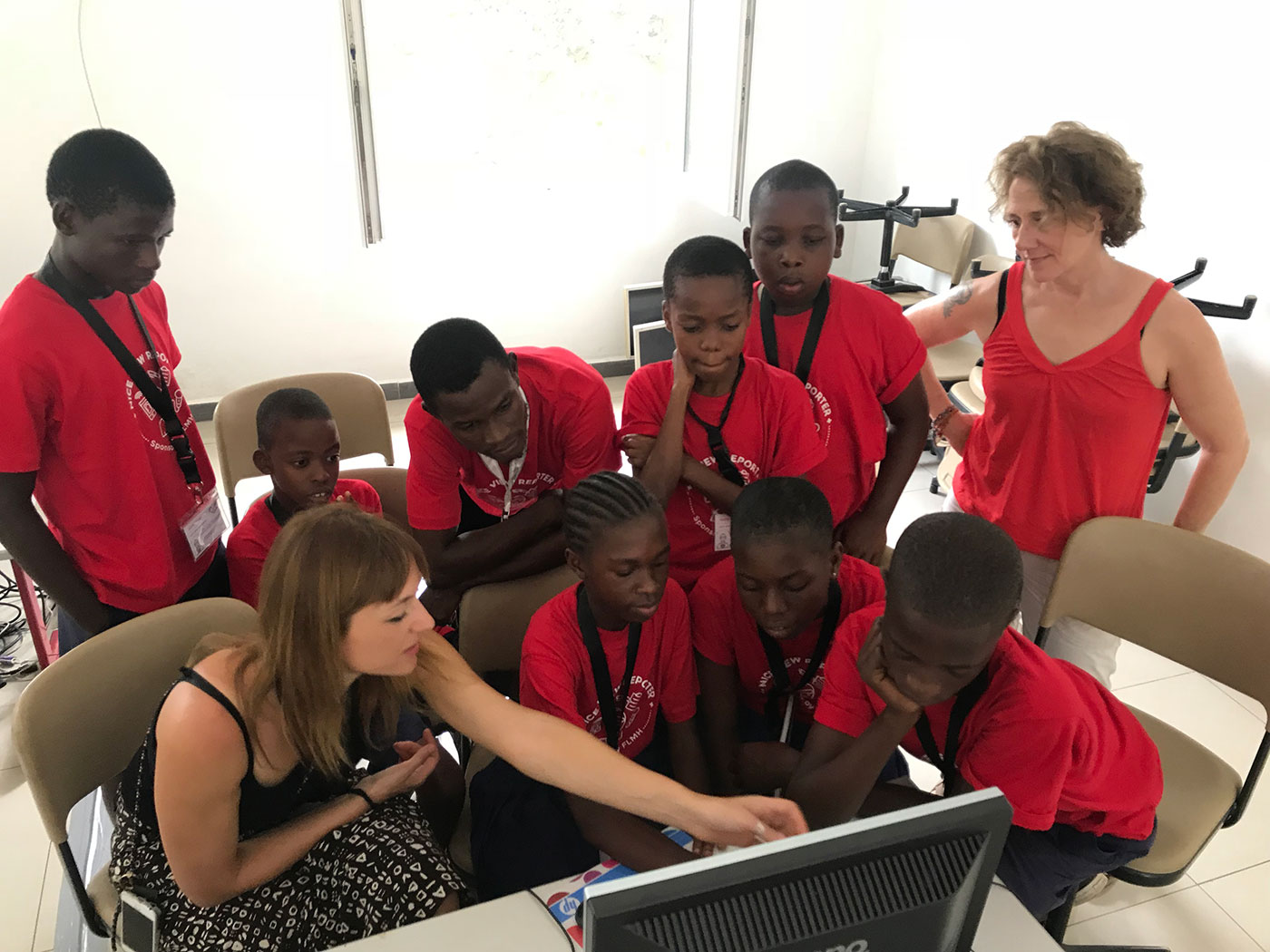 Every now and then, we get the impression that the students can’t really believe that the website is actually accessible via the Internet, that it isn’t just stored on some local hard drive. Mobile phones help. In Kenya, if you can see it on the phone, it is on the Internet. The student access the website http://nice-view-reporter.org/team/ on a mobile phone – and are thrilled when looking at their portraits. 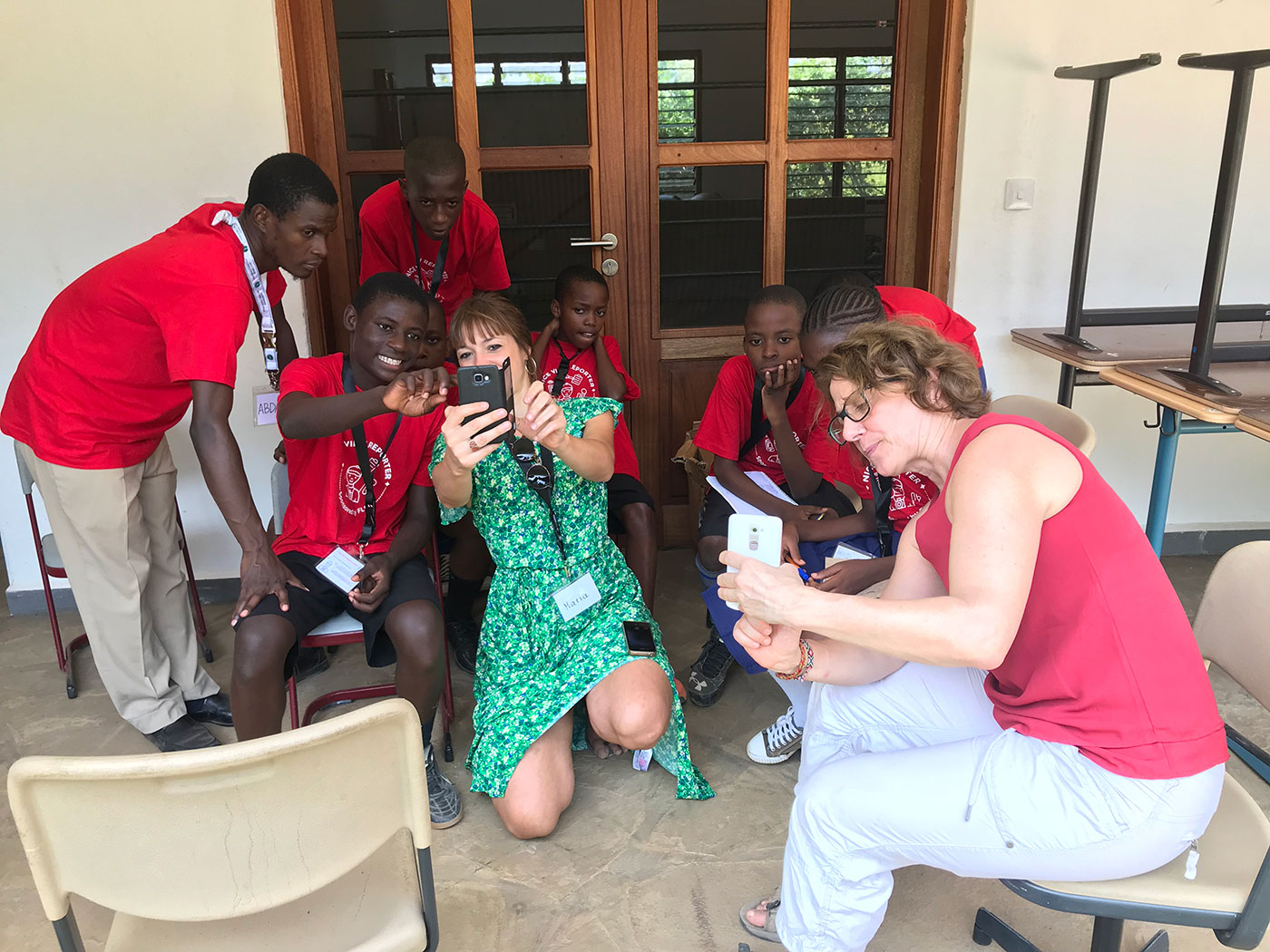 Meanwhile, the other teams are out and about looking for stories from Msambweni. Team Tim is looking for stories in “Market/Business” – interviewing people in their stores, asking how much money the make, finding out if they are self-employed, where they buy their goods, if they offer discounts, and how much initial capital they needed. At first, we were worried that the students might not have enough ideas. As it soon turns out, this was unfounded – it is incredible how many questions they come up with. Within no time, the Nice View Reporters have learned essential reporting skills: That introducing oneself and explaining one’s intentions is a requirement for any successful interview, as is asking for permission to take pictures (which in our case is denied quite often), and not being discouraged if people refuse to be interviewed. At the end of the day, two goals are met: there’s enough raw material for the reports – and the students have gained their first experience in journalism. 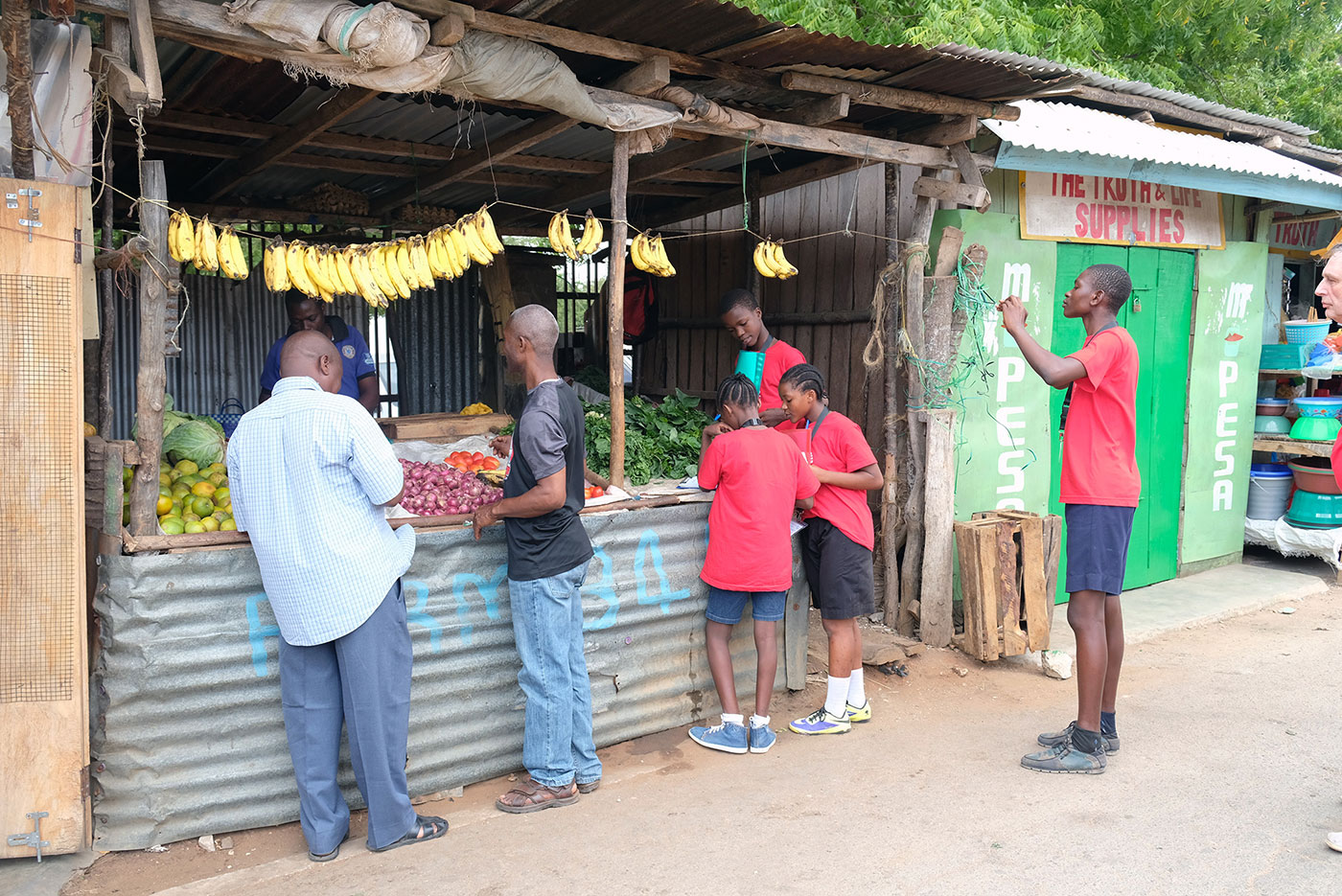 On day three, everything is running smoothly. The teams are well-coordinated, processes are established, and everyone is highly motivated – including the youngest team around Abdalla. In the afternoon, pictures are selected and texts produced. There’s always two teams at the same time in the IT room, not exactly creating a tranquil working atmosphere. Some are discussing picture selection based on their newly acquired knowledge, others are working on articles, others are transcribing interviews at the computers. 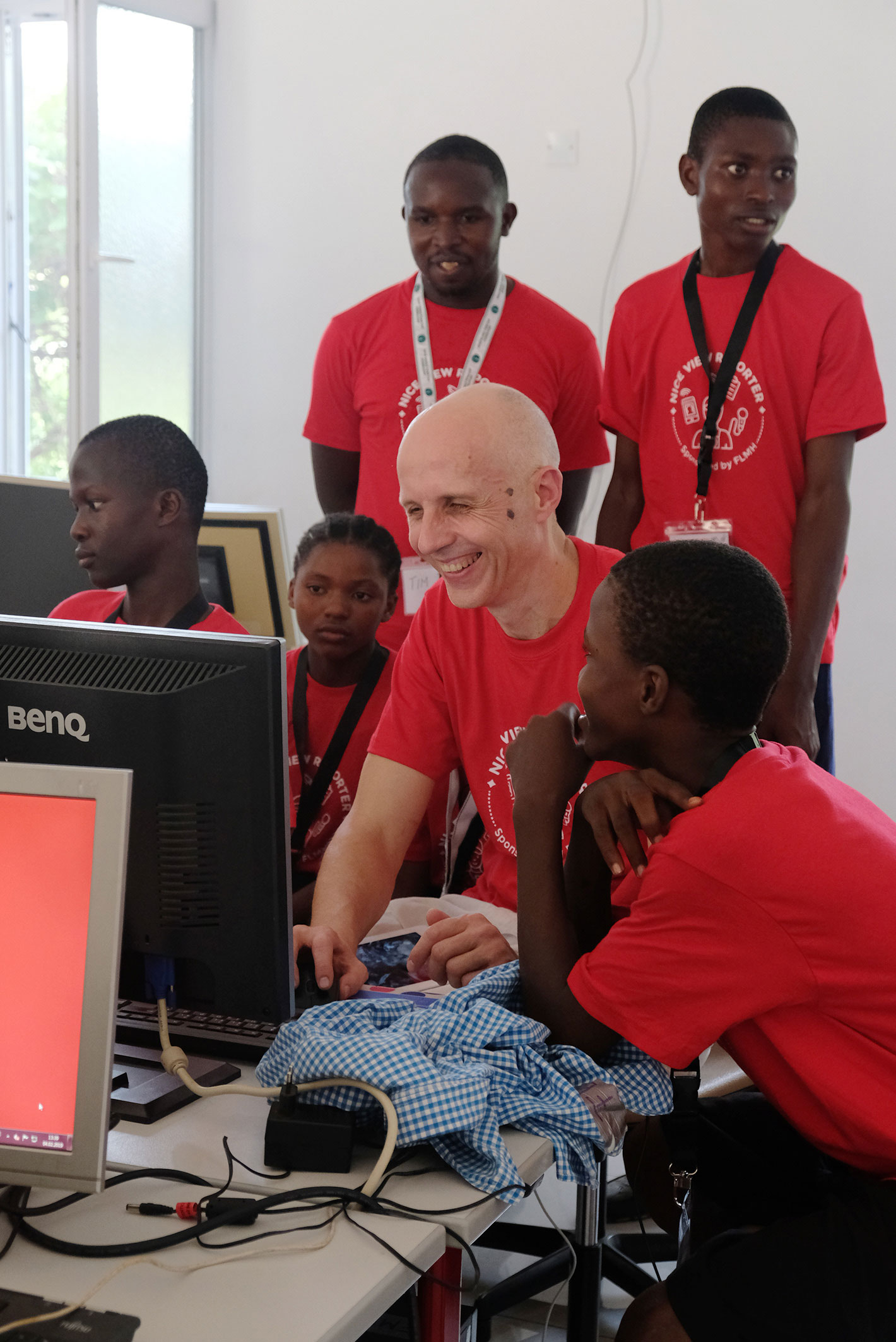 Whoever is not busy with their reports, jumps on the computers not used by the others – and most likely accesses Youtube. By afternoon, this has used up our data volume at safari – and a strict youtube ban is issued. One message we want to convey is that the Internet is more than just youtube, facebook and instagram – we may have to intensify our efforts in this regard. 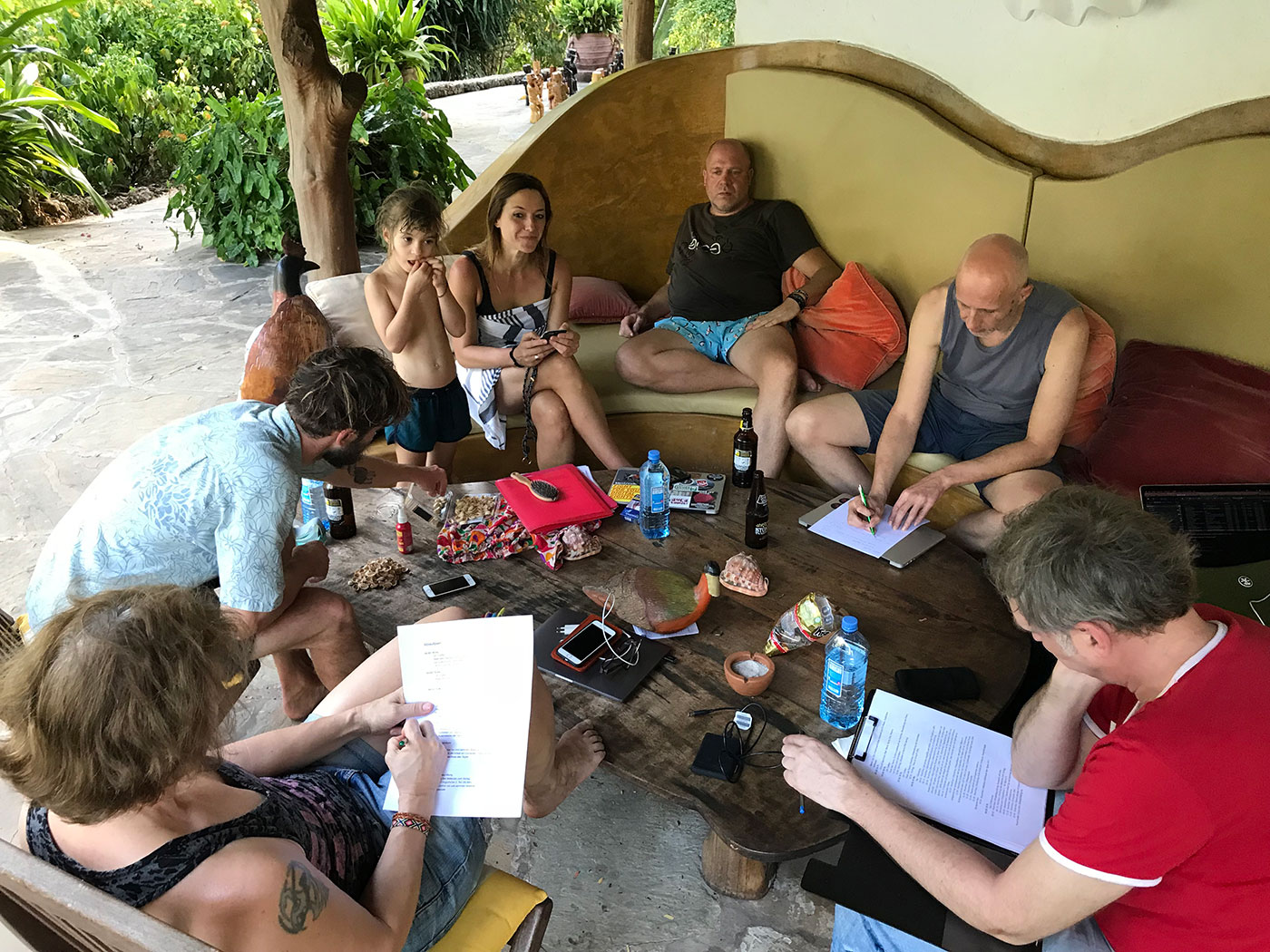 By now, a daily routine has developed: at 8.30AM, the Nice View van picks us up from Mbuyu Beach. From then until around 4.30PM we work with the kids, interrupted only by a short lunch break. Afterwards, the van takes us – by then tired, sweaty, and happy – back to Mbuyu. There, everybody gets an hour to relax – everybody in their own way, some working out, some reading, somse napping, some playing in the pool with our youngest reporter, some doing nothing at all. Afterwards, we have a short meeting to plan ahead for the upcoming day and then get to enjoy a fantastic dinner with Werner and Isabelle underneath Mbuyu’s starry sky.

On the Road with Nice View’s Reporters

“Hello everybody! You are listening to the first episode…”