Reporters Going Mining: A Trip to Kenya’s Largest Ore Mine 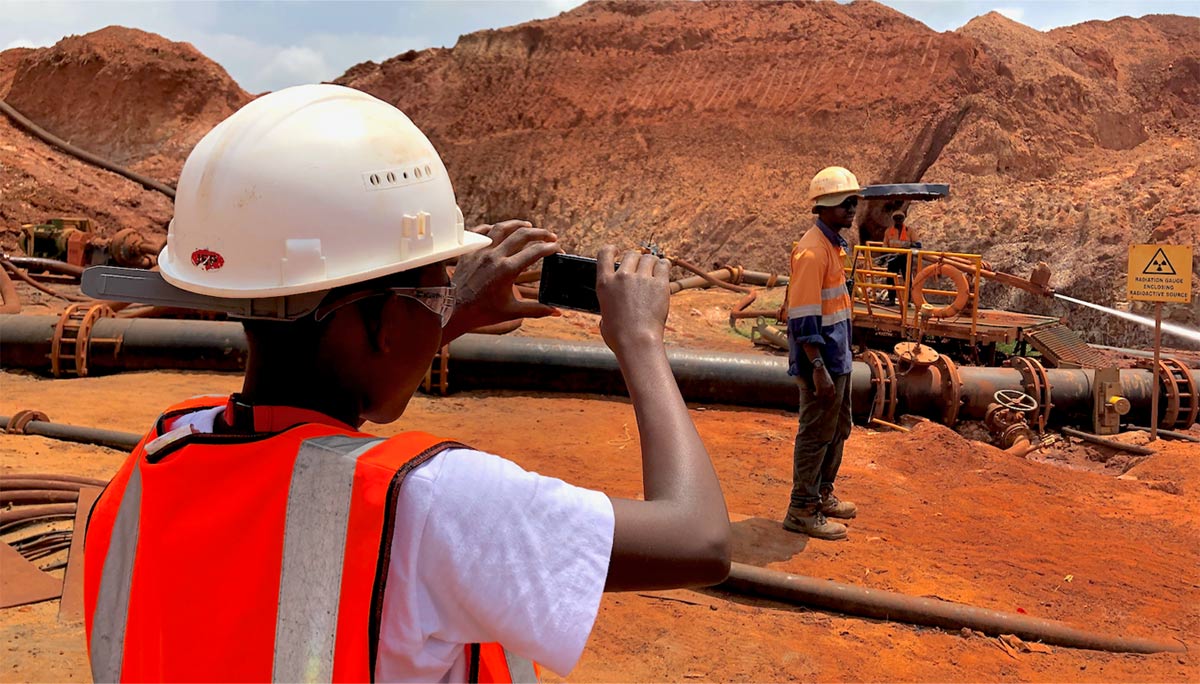 “Team Red” relies on the same ideas as 2019: having fun with photography and using interviews to produce documentaries. When we tell the students where we’re going, they are excited (to say the least): The Base Titanium Mine is a well-known landmark, the yellowish dune-like shapes of its enormous spoil heaps are visible in the distance. We were a bit worried beforehand that students would be disappointed not to be part of the film team. The students’ excitement when told about our destination does away with such thoughts.

Our entire team consists of “new ones”, who were not part of the project in 2019. Two of them are even sixth-graders ¬¬– which isn’t saying that they’re not up to the task, on the contrary, they may be the most motivated of the group. We can’t, however, deny that there is a certain shyness among the students when the two of us – two old, white men, with weird English – talk to them. We go for a little experiment to get over the shyness – I scream, you scream, we all scream…together!

After some exercises in interviewing and photographing, we start preparing our field trip. One thing we learned last year is that it is much easier to get the students to take pictures than to conduct interviews. It’s the same this year. After all, coming up with questions, communicating with a stranger, recording and working with the answers is not as easy as using a smart phone’s camera. What is Base Titanium? What are we in for tomorrow? What are the kids interested in (not necessarily the same things that we are)?

Eagerly, we read through the Australian company’s web site, where it displays information on its workings and, importantly, its “Corporate Social Responsibility”. Team Red’s task: Once you’ve taken a close look at the web site, come up with questions on the topics environment, technology, and people. The first surprise: the amount of great questions that the students think up in no time. The second surprise (on the day after, when we are on site): how much these questions challenge the knowledge of Valentina, the mine’s PR officer.

Our field trip to Base Titanium is very popular – our tour group keeps growing and in the end we’re fifteen people who show up at the mine. Things are getting professional. In the middle of the forest, there’s checkpoints, a visitor center, and supply buildings, all towered by a high dam and factories. You can read up on all this and much more in documentation the kids wrote the next day. Hard hats, safety vests, protective goggles – our group is quite a sight and definitely worth more than just one picture.

The question of what there’ll be for food is an important one on any reporter’s assignment. For lunch, we’re invited to eat in the company’s cafeteria where we’re served chicken, soda, and cake – all the time surrounded by miners in dusty overalls. At first, our host was worried that his might be a disturbing environment for young girls. This definitely doesn’t seem to be the case with our team. We then meet another group of students on their field trip – young girls from a Muslim school, wearing head scarves underneath their hard hats – and understand our host’s worries: they have to consider many different needs among their visitors.

We conclude our visit with three long interviews with our guide Valentina. She makes a lot of time for this – and, as it turns out, is an ideal interview partner for the students: she used to work for a radio station and knows what’s important with interviews. She even contacts us some days later, after the interview has been published, and asks us to improve the wording of some parts. Which we do, of course.

After the field trip, the most difficult part is still ahead of us: how to make several minutes of interview into a running text? Last year, we let the interviewers write down the answers, which in most cases meant that only the first few sentences ended up on paper and that we needed to rely on memory for the rest. This time we’re bolder and use the recording function of our smart phones. Meaning that the answers have to be transcribed afterwards. Team Red starts the transcription process with much enthusiasm. But in the end, again, only a few sentences make in on paper… the rest is transcribed by the (maybe slightly too dedicated) teacher in one, long night shift.

But in the end, everything works out and we are quite proud of the results: Team Red has produced one documentary and three interviews. And has taken really good pictures. When all the teams present their work in a final presentation in front of the entire school, our team gets a lot of applause – and everybody excited when we show the picture of Nice View reporter Yusuf joyfully taking a bite of his chicken. A further success of the Nice View reporters!

The best airport to be stuck at